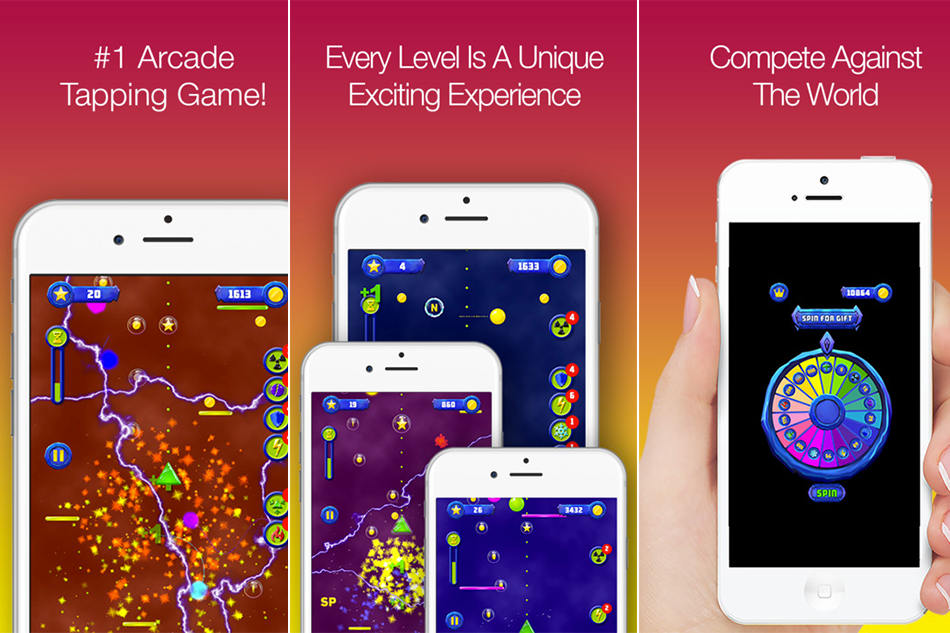 Competitors of Tap and Smash are suppressed by the features available .The game looks simple but challenging. One feature of the game that is unique is its levels that are generated randomly. The difficultly levels have been uniquely mixed and this gives the gamer an experience in gaming that is unique. The gamer is able to collect coins swapping them for power-ups that are coveted, and this sends the gamer to a leaderboard’s top. Some of the most unique feature in the game is the one finger gameplay that is challenging but looks simple, a multiplayer experience that engages and engages the gamer .Other features are creative effects that are special and powerful in-app purchases.

Tap and Smash is like a game that emerged from the past; and all this is due to its design, graphics, music and sound effects. The game is simple in its own nature in a manner that the gamer taps in order to earn points. The game has graphics that are old school like Lines98 or Pinball. The balls in the game are colored in a funky manner and these are only available in palette paint.

The game Tap and Smash is unique in its own way; it hooks the gamer and they become addicted to it making the gamer have the desire to attempt it severally .The game has a multiplayer mode that is addictive. Family and friends are challenged to take part in it and the gamer is also given an opportunity to challenge top players in the game as shown in the world leaderboard of the game. The gamer develops an urge to want to play the game more, have fun and have the desire to be at the top. The game has HD graphics and sound which take the gamer into a world of fantasy.

The game is played in a simple manner; the gamer taps to move upward but in line that is straight hitting stars and coins; the balls should be prevented from wondering, and the gamer should stop and wait for the ball to pass. The gamer has to beat their won score, and there are lines visible on the screen that shows the position of the gamer on the leaderboard.

Nuke which is a power pop-up is offered by the game and this enables the gamer to destroy balls that are solid; turbo is also provided to speed up the process. The Nuke and turbo can be acquired in the game by the use of earned coins while playing the game. The coins can also be bought in packs in form of app purchases (for example 500 coins for $0.99 which is equal to 10 or 20 power-ups).When the game is over a spring wheel is also available and can be tied in the game, and it costs 100coins.

· Tap and Smash is unique and new in the market

· It is simple and has a funky design

· Its rules are simple and anyone can play the game

· Competition is encouraged and this is by group playing

· Power-up are sold are prices that are reasonable.

The game is great and nostalgia is invoked, it suits those who love arcade games that are old-school. The game is simple, fun to play and addictive. Groups are brought closer and together by the game.