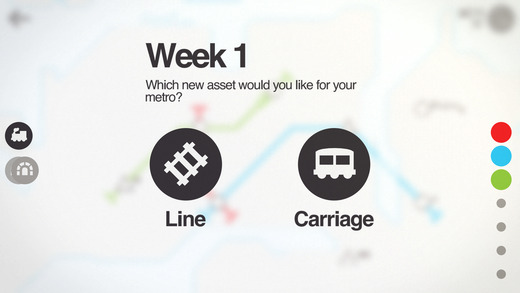 It is proven record that solving game puzzles can immensely boost player’s brain performance and reasoning skills. Besides, games like Mini Metro for iPhone offers interesting platform for its subway management simulator gameplay which makes the entire experience fun and interactive.

The game is professionally developed by Dinosaur Polo Club. If players are fan of the inner workings of a city and their subway system, then Mini Metro for iPhone would accurately suit you.

If users have been craving a simulation puzzle game that uses the concept as the premise, then Mini Metro is apt and attractive with a minimalistic aesthetic. The game simply features a light cream beige backdrop that really makes it simple to view the colored train lines and many tunnels. Each station is shown by different geometrical shape, so it’s not challenging to see how you should be connecting some stations together.

The colors are vivid so there is quality contrast with the background. The animations in Mini Metro are fluid and smooth as the trains move around the city for picking up passengers. There are numerous ways you can play Mini Metro. The first choice would be is the Standard mode, where global users can play in either Normal or Extreme difficulties.

Normal simply permits you to rearrange tracks as required to prevent overcrowding of stations, which will end your Metro system if there is too much overcrowding.  The users could come across 13 levels based on real-world locations, namely as London, New York, San Francisco, Hong Kong, Osaka, Melbourne, and more. You also have Daily mode, where users could compete with other players from all over the globe for the best score on a preset map each day.

The controls in Mini Metro are simple where players just draw lines to connect stations together and get the trains running. It is possible to see how much time has passed since they opened the Metro in the top right corner. You can also get upgrades for your system, like more train cars, larger capacity train carriages, tunnels, which will help you to expand and grow.