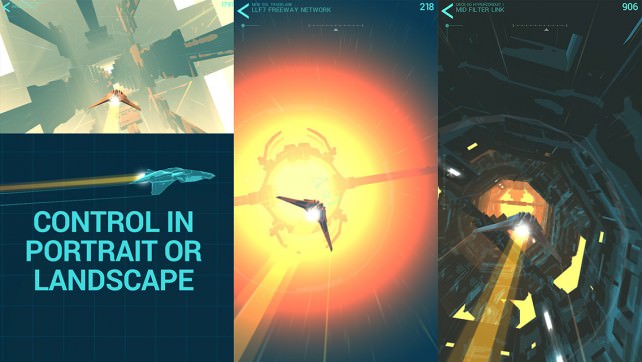 Hyperburner for iOS by Patrick Cook is a high-speed space flier that would really make you feel like you’re truly in the future. If users enjoyed games like Boson X, Race the Sun, and Power Hover, then you would love what Hyperburner brings to the passionate users.

Visually, Hyperburner is rather amazing, and it could be played in your choice of portrait or landscape mode. The game takes place in the future with a distant colonial solar system, so that it means lucrative intergalactic settings fly through at high speeds. The game is actually rendered in 3-D and with enough depth to make you really feel like you’re there.

It is revealed that Hyperburner features six different zones that all have their own distinctive traits, and colors in the game range from bright with respective vibrant to soft pastels. The users would view every last bit of detail in the environment and even the ship you’re flying.

The powerful animations are smooth and fluid as you play, which is key since everything is rather fast-paced. They have full of catchy techno music that fits in well with the space and sci-fi theme. Eventually result is that the developer put together quality visual and audio package in Hyperburner, and it’s worth the money to experience it.

There are about five different stages to each of them. For these set levels, there is an endpoint that you must reach before moving on to the next stage, whether be the next one in the sector. Moreover the users would be able to see your progress through a stage in the upper right corner, though it might be difficult to take your eyes away from the action so you don’t crash. In later levels it would be difficult to complete since the obstacles become trickier with movement patterns and your ship’s speed is increased. In conclusion the game looks beautiful, the music is quirky and fun and game play itself is immersive and challenging.