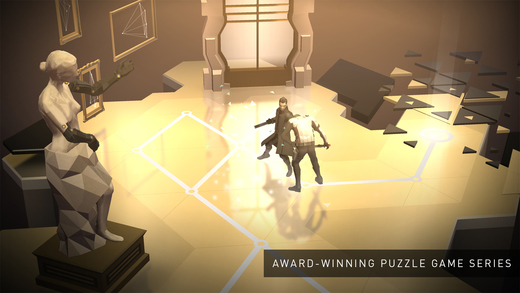 Deus Ex GO for iPhone by Square Enix Inc is the third GO series of games, which also consists Lara Croft GO and Hitman GO. The familiar GO games are definitely worth checking out and they are popular for fantastic puzzle game nonetheless.

Deus Ex GO is beautiful and it represents a stylized interpretation of the Deus Ex universe. The dystopian environments are wholly packed with fine details and textures. The colors are clear with a subtle vignette effect. It is said that the user’s character, Adam Jensen, would be sporting his signature black trench coat and sunglasses by simply moving fluidly on each turn.

Their foes, including guards, turrets have their own unique appearances, movements, and immense abilities that players have to carefully watch out for. The artwork for each character’s avatar in dialogue boxes is gorgeous.

It is described that Deus Ex GO is level-based, and players must go through each stage in chronological order to advance through the story, which includes a conspiracy behind a terrorist plot. The key objective in each puzzle is to assist Jensen get from the beginning point to the portal at the end that virtually takes you to the next area, but active players can’t be detected by the foes. So there’s a line path on each level, and players move Jensen one space on each effective turn.

If suppose the users are detected by an enemy, they would simply activate their Titan Armor and come after you in a straight path, but only as you make your move. The turrets shoot you on sight, and later on there would be drones, walkers, and other crazy enemy kinds.

It is totally a puzzle and things happen on a turn-by-turn basis, it’s vital to make note of where foes are going and timing the movements must be accurate to strike. Interestingly, since there is no time limit period or move restriction on the puzzles, the users could take as long as you require solving them.