Dan The Man for iPhone 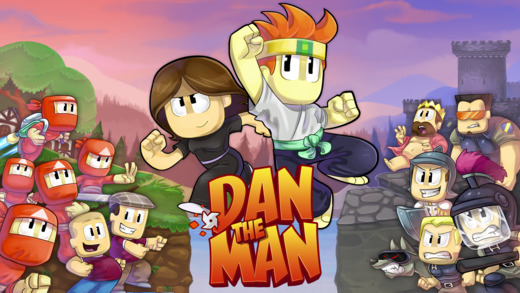 Dan The Man for iPhone introduces the users to action-packed game that comes with amazing fun is absolutely worth trying. The developers of Fruit Ninja and Jetpack Joyride are increasing the tempo with a hard-hitting brawler that would send your enemies flying.

This is the exact experience that is awaiting the ardent game players from the newly released Dan The Man for iPhone. It is professionally developed by Halfbrick Studios and they fall under old-school style arcade platformer game which is packed with joyful aspects.

The game has a classic vintage pixel-art style aesthetic that is wholly packed with neat detail. The environments range from lush wildlife areas to modern civilization and all of the settings look attractive. The color palette is eye catching with tones ranging from bright to darker richer shades.

Like other famous traditional platformer brawler games, the game features a level-based Story Mode, and users must clear the current stage before they could move on to the next area.

Finally the users can unlock daily missions and weekly events, which actually add to the replay value of the game. Dan the Man is a brawler and it has perfect story behind the chaos. A mysterious company has emerged from the shadows and plunged a village into peril. So they took Dan’s girlfriend, Josie and it’s up to users to help save everyone.

The key goal is to reach the endpoint of the stage you’re on, or considerably defeat bosses in mighty battles. There are some parts of the level where users have to face off against a set number of enemies before players can proceed. As such there’s no time limit in the game for players. The controls in Dan the Man are so simple enough to understand.

The money with which players could find could also be used to purchase upgrades for your selected character, namely as stronger attacks, more health, and even new moves. If users are passionate fan of action-packed brawler platformer games, then it is highly suggested for giving Dan the Man a try.