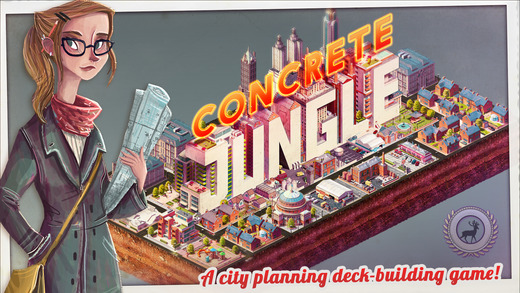 A follow up to the popular puzzle hit MegaCity , Concrete Jungle for iPhone is the latest new take on the city building genre that accurately swaps micro-management for more strategic and puzzle-orientated kind of city planning. It was professionally developed by ColePowered. If users have never played it before, then there’s no best time to jump in than now.

The board comprises isometric block of earth, and players could even view the several textured layers of the Earth’s crust from the sides. Each square holds numerous building structures, which virtually appear miniature in the grand scheme of things. The colors are exhibited in realistic manner and represents of how things are in real time.

The users experience two modes in Concrete Jungle namely as Campaign (story) Mode and Custom Game. This comprises Solo, Versus, Classic any of these could be actively saved and loaded with the “Load Game” option until they’re wholly completed. If you are new then it is best to go through the Campaign, since it would illustrate you the ropes and the game itself could be rather challenging.

The custom games perfectly permits you to play solo or versus AI or local players. It is also possible to tweak the game length and other settings to your liking, including endless option. Irrespective of how you choose to play, the goal remains the same. The users need to clear city blocks by gathering up the needed amount of points from residents on that block. The players could also end up building own puzzles as you get further process in the game. They would realize that they have developed zoning issues depending on earlier actions.

As users start each game, they would have about 12 cards in your deck, with your starting hand appearing on the left side of the screen. The highlighted cards are what players can play right now, and if it’s multiple options, they could simply tap on the one you wish to play.