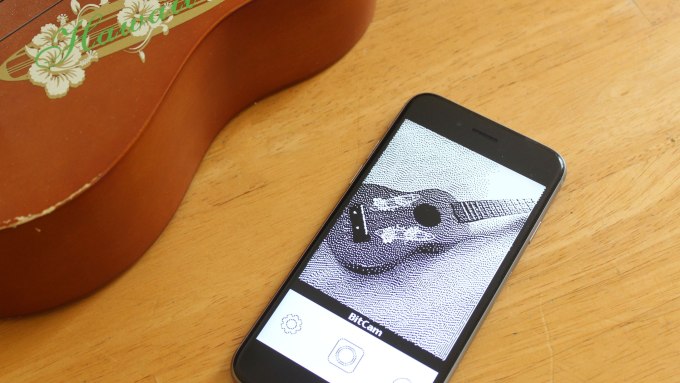 If your olden days on the internet comprised dial-up modems, slow-loading pages, and low-res graphics, then you would get a kick out of a new app called BitCam for iPhone.

The app, which hails from Iconfactory, best known as the makers of popular Twitter client Twitterrific, allows you snap retro-looking images with your iPhone camera. But it’s more than that the app itself is qualitatively designed to look like it’s from the past. As the firm enumerates BitCam is the digital camera you would have used on your mini pocket computer back in 1996.

BitCam for iPhone camera app has a black and white interface because color graphics support back then was not broadly available. It also provides none of the animation seen in today’s apps, which virtually means the credits jerk as they scroll by. And it usually throttles the speed to simulate a 16-bit processor.

BitCam comprises three pixel resolutions, which it named FatBits, Standard, and Super-Res. BitCam has professionally invented its own terminology that sounds like something from another era, too. This entertaining phrasing continues in the settings where users could select to take photos with the “Self Camera” the front-facing camera or square-shaped photos for sharing on Instagram by actively selecting the “Instaphoto Size.

The users could also “Install Color Graphics” as an in-app purchase. In addition to Twitterific, Iconfactory has its own portfolio of apps for iOS and Mac, comprising iPulse, xScope and Flare 2, and has effectively worked with organizations like Facebook, Twitter, Microsoft, eBay, LEGO, Paramount Pictures, Lucasfilm, and others.

You could also experience a Photos editing extension where users benefit a lot. It also means that users convert photos already in your Camera Roll. Iconfactory reveals that users are enjoying the “self camera” feature the most. The app is a fun toy, and certainly makes you feel a bit of nostalgia for the old days.