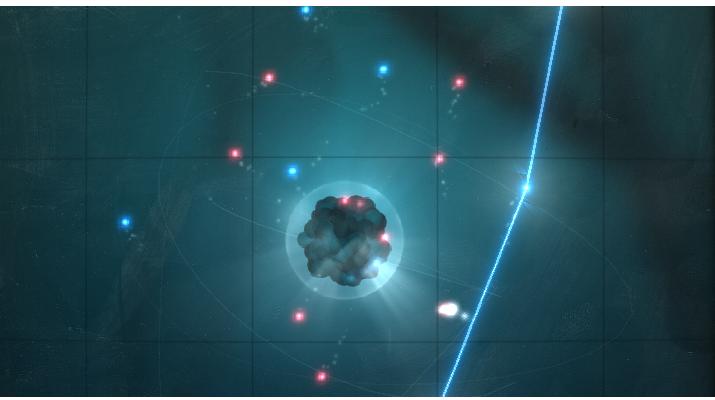 Beyondium for iOS by Mediocre AB is a new connect-the-dots puzzle game which is fast and entertaining. If users wish something more challenging and arcade-like, then they must try out Dirac. You could explore the microverse with top scientists from across the globe utilizing the revolutionary Beyondium engine.

The Beyondium game has a fairly dark background mixed with shades of blue and green. The molecule centered on the screen has a nice glow and making it simple to spot. The atoms that are actively emitted from the molecule, which is named DIRAC, are tiny but simple to spot due to the bright, neon blue and red coloring. The exclusive animations in the game are smooth and fluid. There is also soothing atmospheric soundtrack.

In Dirac game the players are given the role of an intern at a laboratory, which permits them to work with the DIRAC, the latest in computerized quantum disentanglement technology. The main job for users is to manually disentangle and sort through the macroscopic existence of the microverse. In this popular game there are actually five different game modes in Dirac respectively as Novicium, Medianium, Extremium, Beyondium, and Absurdium.

The molecule in the middle would be emitting particles of light that are colored blue and red. The passionate player’s job is to “disentangle” them, which involves connecting the like-colored particles together by drawing a line between as many as you could to create a chain.

Once the whole molecule is depleted and users don’t make enough connections to fill the gauges at the top of the screen for more molecules, then this interesting game ends. At the end of a game, users could view how long they have survived, how many boosts they have made, how many points they got from best move, and the highest multiplier they have achieved. Altogether this game is worth playing and entertaining.