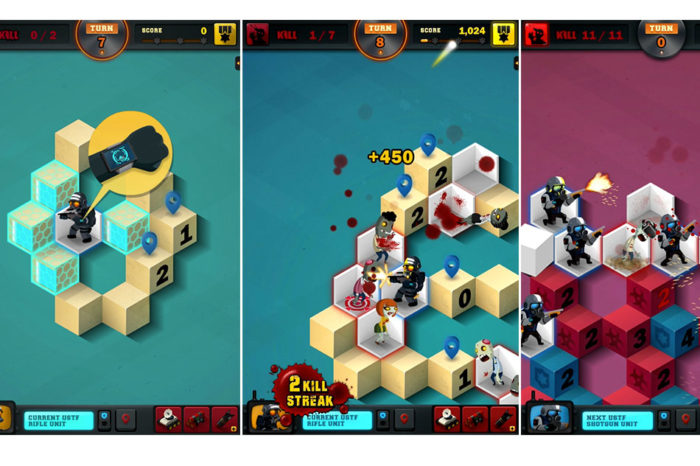 Zombie Sweeper is an upcoming puzzle game that is coming out for iOS devices in 2017. The game features unique puzzle mechanics that have never been seen before in mobile games. It’s a lot like Minesweeper, the game developed by Microsoft which came included with Windows XP.

The similarities end there, though. Zombie Sweeper is a much more fun game with over 250 levels. The levels progress in difficulty and continue providing a challenge. There are 40 different Zombie types. Each type has its own strengths and weaknesses which must be kept in mind to overcome them effectively. There are also 9 bosses which must be defeated to complete the game. While it’s a puzzle game at its core, the game is full of action packed sequences that make it more entertaining and satisfying to play.

Zombie Sweeper is easy to understand and start playing immediately. A short tutorial sequence explains the game’s concepts and mechanics adequately. While it may seem like the game is a bit too simple and will grow boring over time, the variety of enemy types and increasing difficulty level are sure to keep you hooked. Zombie Sweeper is a fun game which you won’t be able to put down after starting. As the game is divided into separate stages, it’s perfect for playing in quick bursts while waiting in line or commuting in the subway, for example. It’s a simple game which you can play and enjoy at your own pace. Its laid back gameplay makes the game perfect for playing when you want to relax and relieve stress.

The game also has a multiplayer mode where you can compete with your friends or people from around the world. It increases the value and replayability of the game and adds a competitive element to it. Players will also have the ability to share their high scores and view their rank.

Zombie Sweeper has an interesting story that is told through movie quality cut-scenes. The zombie outbreak in the game is triggered when Kent, a subject of a secret bio-weapon experiment conducted by the military, escapes from the facility. In response, the government creates the Undead Special Task Force or USTF. As USTF’s commanding officer, your mission is to capture and bring back Kent alive. Along the way, you’ll uncover many secrets that’ll make you question the government’s motive.

The game is a product of Arc Game Studio. It’s basically a one-man team that’s made every aspect of the game from the art to the levels. It’s quite amazing that a game which looks as promising as Zombie Sweeper was made by a single person working tirelessly for days on end.

In conclusion, Zombie Sweeper is a unique game which brings some new and exciting concepts and gameplay to the puzzle genre. It’s certainly set to bring some innovation back into the field of Zombie games. It’s also quite commendable that a single independent developer could make a game of such quality that is fun to play. Arc Studios debut game is sure to find several casual players and could even go on to be one of the most popular games on the AppStore. The game is set to release in August or September of 2017.