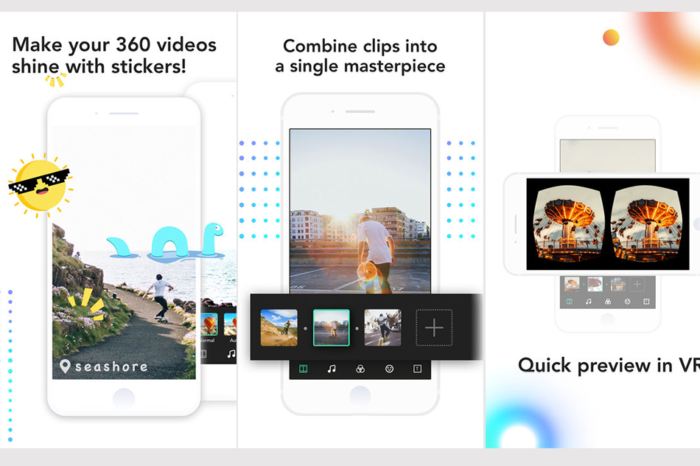 This application is a video editor. More than that, the VeeR VR Editor – 360 Video app is specific to 360 degree videos. This app has wonderful capabilities, and is breaking through the barriers of phone video editing.

This app edits 360 videos only. Attempting to use any other video type will not work, as this editor is VR specific. The ratio associated to the video/picture format is 2:1.

There is a trimming feature which allows video clipping. This is a great editing tool, and is a must have for any video editor. Unfortunately, there are no clipping capabilities for sound; thus, a separate sound editor will be required to match video to sound in synchronous fashion. For example, if the video is 30 seconds, and the sound clip is 45 seconds; then, the resulting edit will cut the last 15 seconds off of the sound clip.

The VeeR VR Editor – 360 Video app has another necessary tool at its disposal. The user can select orientation, and choose how to set up the scene. There is the ability to change scale and rotation.

Orientation can be applied to the video, stickers, emoji, and text. This is truly a way to personalize a 360 video.

Overlay filters can be applied to the video. The drawback is that the filter overlay will be applied to the entire video, as a whole. There is no way to place overlays by clip. With that being stated, it is nice to be able to change the atmospheric tone, as desired.

There are various speed selectors available. The video can be increased, or decreased in speed.

This app allows the user to add stickers into the virtual reality environment. For example, a watermark appears on the ‘floor’ area of the video. By adding a sticker, or emoji to the watermark, the video is now more personal in feel.

There are different animations to the various stickers and emoji. I really liked this aspect of the app. With the animations, the video can be made to ‘pop’ off of the screen, as it were.

This app gives users the chance to add in their own text. Orientation and color are the attributes that can be changed, according to each text placed within the scene. With no widely available font styles, however, the choice is a bit limited on text selection.

One of the first things, a user will notice upon startup, is that there is the ability to add multiple videos together. I consider this to be a must have tool when editing videos, and VeeR VR Editor – 360 Video app does not disappoint.

Overall, I believe this app is well on its way to setting a new standard in small device video editing. This is not meant to be a professional editor, as in making a movie. It does, however, bring the ability of 360 degree video editing into the palm of your hands. With the key features readily available, I can see a lot of potential to come from this powerful video editor tool. I recommend the VeeR VR Editor – 360 Video app to anyone who enjoys making videos.