To The Throne for iPhone 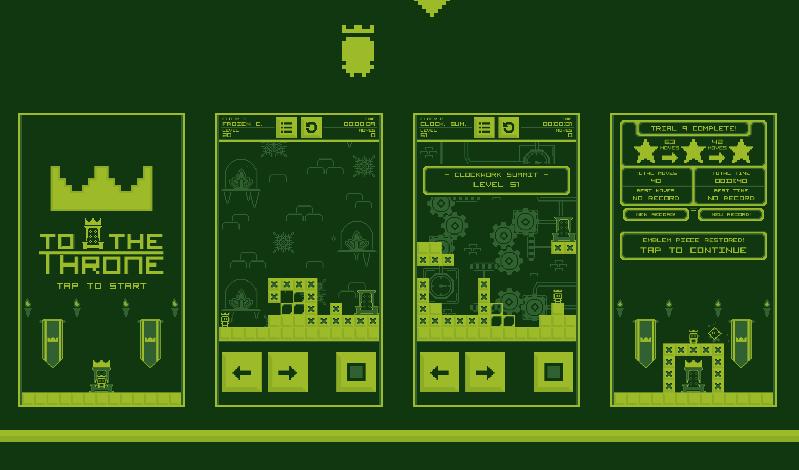 To The Throne for iPhone by Raredrop Games Ltd is a retro-inspired minimalist puzzle game that is wholly depicted with royal challenges. If players like games that make you think and are full of charm, then To The Throne is definitely one that you must try.

The visuals in To The Throne are really vintage and delightful, taking global users back to their childhood. The game features quality pixel art designs that make users feel like they are in the ‘90s again. There are also several designs in the background that describe the areas that you’ll be going through as you guiding a young king to his true throne.

There are actually 52 stages spread out across six different areas. To The Throne illustrates the story of a young king, King Kingsly, who must overcome difficult trials in order to earn the right to his true throne with the proper guidance of his royal advisor, Bitsworth. The game starts out easy enough, but as you advance through the puzzles, the players find that things are getting tricky as they go.

The key objective in each stage is to reach the throne and collect any pieces of the shattered Royal Emblem that players come across. For moving or turning left or right, players must tap on the directional buttons in the bottom left section of the screen. In order to pick up a block, tap on the button in the bottom right corner. It is revealed that every new type of block is introduced and players have to tinker around with it before they could figure out how to solve the puzzle. It immensely forces you to think carefully and plan out good moves.

Making things more challenge in this game, each level would show a timer at the top as well as how many moves players have made so far. In this interesting game, moves only includes the number of times you’ve interacted with blocks, not when players just move your character left or right. The puzzles could be solved through trial-and-error, and there is option of having replay value.