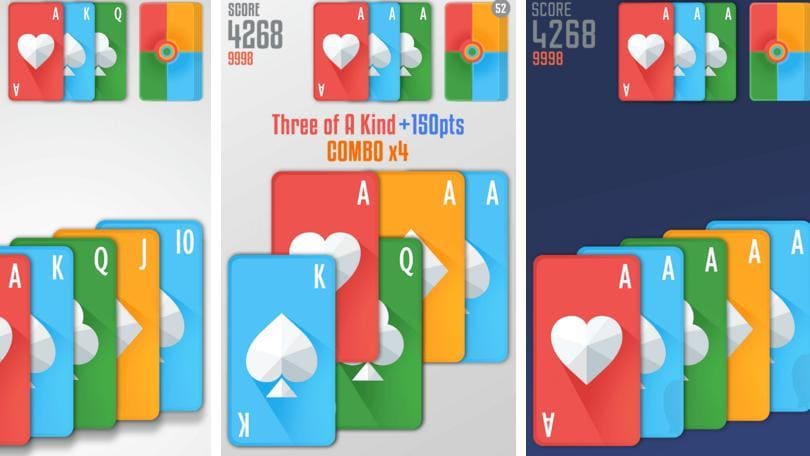 Politaire for iOS by Pine Entertainment is a combination of both poker and solitaire. Politaire has a minimalistic feature with stylish aesthetic that users are bound to just fall in love with on first sight. The background is white with a subtle paper texture to it, which illustrates how much care the developers put into developing the right design.

If the white is too bright for you at night, there is a Night Mode that users could be toggled in the settings, which turns the white background into a dark blue black. The colorful card back contrasts well with either backdrop, or the card faces that would catch your eye.

There are two game modes in Politiare respectively as Single and Double Deck. The single and double Decks still play the same, though; it’s just the fact that double has twice as many cards for global users to go through. The key objective for both remains the same: users need to clear the board by making poker hands with the five active cards in your hand.

The users could play the game with simplicity enough. In the beginning, users would start off with five cards in your hand. On each turn, they could actively select up to three cards by tapping on them. If you wish to discard them, just swipe up, and then users would draw an equal amount of cards from the draw deck that they just discarded.

When you make a poker hand, the cards would automatically slide up and could see what hand you just made. The game would also convey you how many points that was worth, which is also beneficial when you start a combo. Altogether the mashup gameplay of poker and solitaire means amazing and challenging puzzle. While the world seems to have been concentrated in Pokémon Go fever, this popular Politaire fits that bill perfectly, and it’s entertaining too.