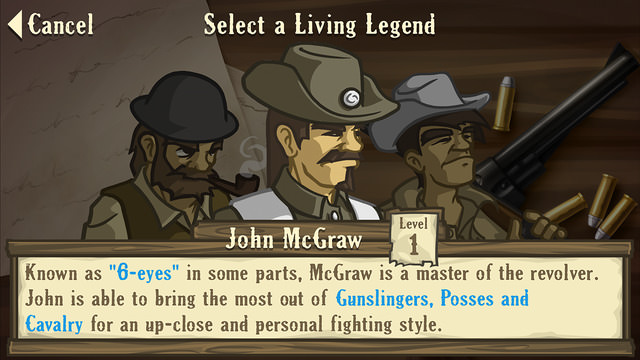 Lost Frontier for iPhone by Mika Mobile, Inc. is a turn-based strategy game that is quite popular among users. It has a cute little cartoon art style that Mika Mobile is known for, and the details of the Wild West environments are rather exclusive for their toon-like nature.

The colors used in the game are vibrant, and all text is simple to read so you aren’t struggling to know what’s going on, particularly on larger screens. There are three several modes available in Lost Frontier respectively as Story, Challenge Maps, and Custom Game.

However, everyone would require beginning with Story Mode, since the other two are unlocked as you make progress in the game. The users also start off with three different “Living Legends,” who are the leaders of your forces. Moreover each one has their own peculiar lay style and would bring out the best potential in the units you select to play with.

While users start out with three, there are nine of them, so the last six you’ll have to unlock. You have also 20 different unit types that you could recruit on the battlefield, though like everything else, you have to discover them all and actively unlock them to use. It is revealed that each unit has their own strengths and weaknesses, namely as close-range Gunslingers, sniping Riflemen and Cannons.

When users start off with Story Mode, they would get to pick which Legend you want to play as, and they would level up as you complete missions. The users could select any Legend before diving in. In situations when Legends level up, they would gain more properties that boost your team, respectively as more health or increased damage. It is also possible to earn up to three stars on each map as you complete main objectives. The key to success in Lost Frontier is the fact that you require to capture saloons and other buildings to recruit more units during battle. In addition variety of maps, modes, Legends, and unit types creates something sensational.