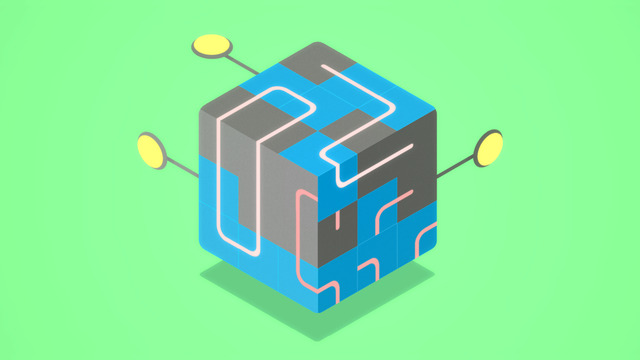 Klocki is a stunningly gorgeous game which features a simple and clean minimalistic design. This game is wholly rendered in 3-D with an optical illusion. It also features gray blocks with scrambled up lines on them, and the blocks and lines light up once the solution is solved.

In this Klocki game the players are just thrown into the game without any tutorials. The game play itself is pretty straightforward once you begin to just tap and tinker around with things. Like other puzzle games, Klocki is level-based, and players go through them one-by-one in linear order.

It is revealed that there are no chapters or worlds to unlock it’s just puzzle after puzzle here. Once users solve a stage, they move forward to the next one, but could still go back and replay the ones that they have already completed. Altogether this game is all about connecting the lines.

All of the blocks that are on the screen would have some line segments on it, and it’s your job to connect them all together for that specific section of blocks. The difficulty curve in the relevant game is pretty gradual though. Most of them are simple enough, and everything could be solved through a bit of logic as well as trial and error process.

The minimal design of the game is just attractive, and the music sounds are quality notch. Even the controls are intuitive and easy enough for everyone to pick up, and the game play is so much relaxing but stimulating at the same time. If someone really good at puzzles they could easily get through this in a few hours. For users it’s an enjoyable way to relax if you like puzzle games.