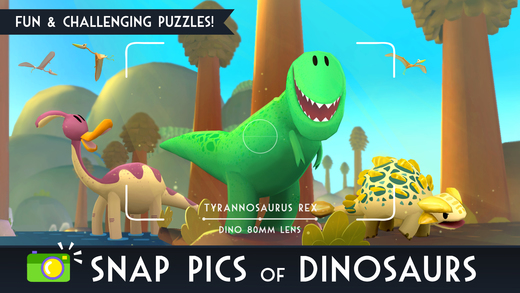 Jurassic GO for iPhone by BebopBee, Inc is an on-rails photography shooter and simulation game. It is a fun and colorful photography adventure, with dinosaurs. You could discover extraordinary and quirky dinosaurs in this amazing Jurassic Adventure. It is also possible to snap their photos and build the greatest Dino museum on Earth.

The game is wholly rendered in 3-D and the four environments are nicely packed with enough detail to immerse users in the prehistoric world. The colors are clear with realistic shadows and lighting, so it’s eye catching one.

The character models for all kinds of dinosaurs that users encounter are lovable. They actually look like real dinosaur models at the same time. The animations, movements of the dinosaurs and the on-rails mechanic are exclusive.

In Jurassic GO, the users take on the role of a photographer who is hired by a Dino Museum to venture different environments for tours and snap photos of the dinosaur creatures that they come across. The game is a simulation, so users would be there as you watch the museum grow in size and popularity. The players need to assist build things around the island to attract more number of tourists.

There would be more NPCs that they provide you with useful tools for your tours. You could also upgrade when you meet their needs and criteria. There are four special environments that users can take tours namely as Swamp, Crater, River, and Badlands, and players have to unlock them as you progress with Exploration Funds.

By each environment users have a set path to go through, the creatures that you would encounter would certainly vary on each run. It is illustrated that most of the fun is going out and searching the dinosaurs for photos, so users have to keep an eye on your island as well. The users must pay attention to the number of tourists who arrive to check out the museum, and immensely build new buildings to make it massive tourist attraction.