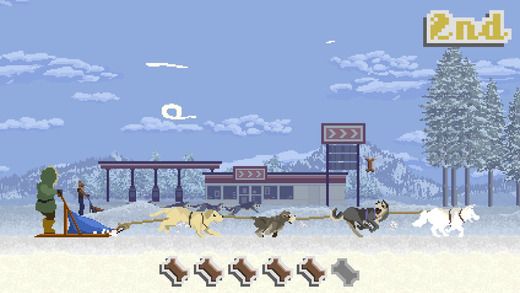 A fast-paced, dogsledding simulation game can be quite fascinating and engaging. This is especially due to the fact that the global users will required to be attentive throughout the period of the game. Dog Sled Saga for iPhone by Dan FitzGerald would certainly appeal to all dog admirers out there.

With regard to visuals, Dog Sled Saga is lucrative, as it entirely features a retro pixelated aesthetic that is well detailed for what it’s worth. The animations are fluid with each dog illustrated of own unique personality.

You also have a quirky chiptune soundtrack that goes well with the game, and realistic sound effects, specifically for the dogs make it feel more realistic. The hard working developers have done good job in terms of how the game looks and sounds.

Dog Sled Saga is a simulation game and so there’s only one game mode that’s termed as Career. As users start the game they will be asked to pick between one of two different dogsledder character models. After then global players can pick their first three dogs.

For purpose of earning money, the players will have to participate in dogsled races and attain a ranked position to get some cash, which you actually need to pay your other expenses with league dues.

As players advance in the game, they are able to hire employees for multitasking purposes for your quality team, get sponsorship for your dog’s fame, breed puppies, hire more skilled dogs, and much more aspects. It is like one of those gripping games where passionate users can’t stop playing for most of the time.

Though the game is all about dogsled racing on the surface, there is absolute surprising amount of depth, strategy, with simple micromanagement behind Dog Sled Saga. In conclusion it should appeal to any simulation fan. The racing aspect is sensational as well, making it feel like an arcade mini-game in the simulation.