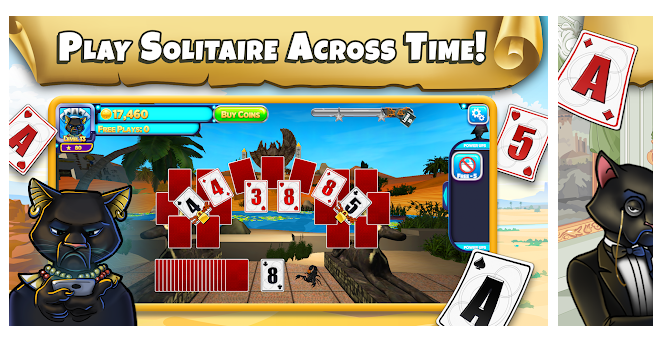 From the Wild West to the depths of Atlantis – ever wondered what those places looked like? In Solitaire Time Warps, available to download on iOS and Google Play, you can visit them (and many more wonderful locations) on an epic solitaire adventure. You have a time travelling cat companion, too. What’s not to like?

It’s an exciting, fun-filled take on the classic solitaire game, combining all the well-known versios of the card game such as Classic, Klondike, Yukon, Pyramid, Spider and more. Whether you’re a big solitaire fan or not, the game has enough familiarity to make it feel like a solitaire game, with lots of new mechanics and things to do that make it an exciting, hard-to-put-down puzzle game.

You’ll find that the levels get progressively more difficult, giving even the most masterful solitaire players a challenge, especially with the introduction of a streak meter and obstacles like bombs, locks and card eaters. You receive generous rewards for completing levels – and free rewards each day – so progression isn’t a grind.

If you’re looking for a Solitaire game that’s fun to play in short bursts, but engaging enough to keep you occupied during long sessions, check out Solitaire Time Warp on iOS and Google Play now!